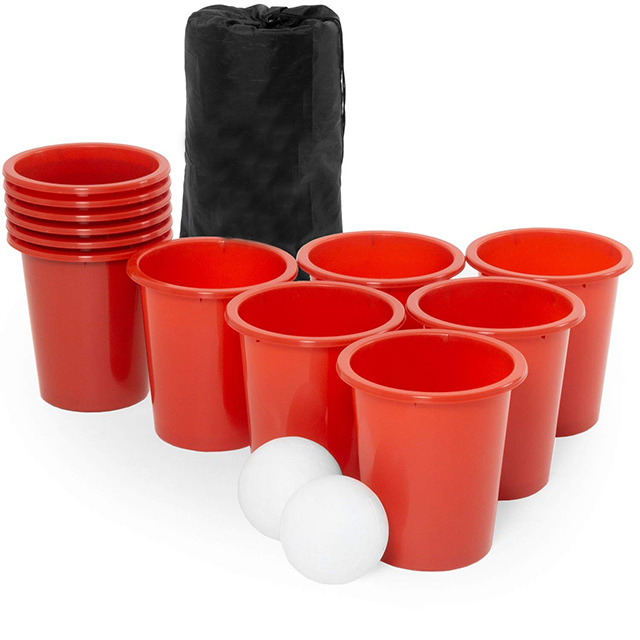 Bucketball is an oversized take on classic pong (beer or otherwise!) that allows for great fun and tailor made levels of difficulty.

Bucketball is an oversized take on classic pong (beer or otherwise!) that allows for great fun and tailor made levels of difficulty.

Games are generally played with 2 teams of 1-2 players each. Set up both sides as shown in the diagram at right. Choose a distance between teams that suits players’ skill levels and available space.

Decide which team starts by a coin flip, rock-paper-scissors, or shoot off.

On each turn, each player on a team tosses once, attempting to get their ball in one of their opponent’s buckets. If a ball goes into a bucket, then the bucket is removed.

Each team is allowed one re-rack per game.

Once a team eliminates all of their opponent’s buckets, the losing team has one chance at rebuttal. In rebuttal, each teammate is allowed to shoot until they miss.

If they manage to sink all of their opponents buckets (meaning all buckets have been eliminated), the game enters overtime, where three buckets aside in triangular formation are set up, and whichever team sinks their opponent’s buckets first wins, no rebuttals allowed.