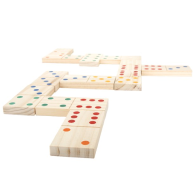 Giant Dominoes is a yard-sized version of the traditional game. The rules are the same, but the pieces are supersized!

Set up by laying all the dominoes face down. One player then mixes them up and each player picks one tile to decide who will go first. The player with the highest double goes first.

Begin by shuffling the tiles again. Each player then draws 7 tiles for their hand.

Each turn consists of a player laying down one title. The player to go first can put down any tile of their choosing to begin the game. Subsequent tiles must have a side that matches the open end of a domino that is already in play, as shown in the photo above.

Optionally, if all players agree to the rule variation, players may play another tile if they play a double. If a player has no tiles in their hand with matching sides, they must either pass or take a tile from the pile.

Some variations require players with matching sides to play their tile; otherwise allow them to pass. Choose your variation(s) before you begin to play!

The first player to play all tiles in their hand wins the round. In the case where none of the player are able to make another play the game is considered “blocked” and the game is over.