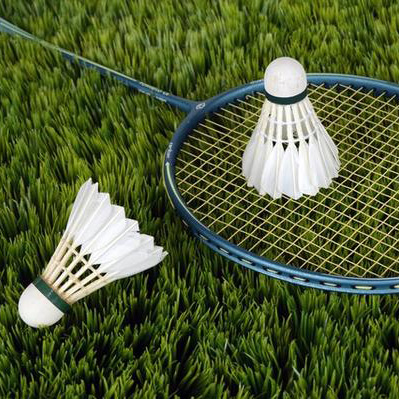 Badminton traces its roots back to the mid-1800s, but the fast paced game enjoys a lively following today.

Badminton traces its roots back to the mid-1800s, but the fast paced game enjoys a lively following today.

Games are played 1 v 1 or 2 v 2, and a regulation court is measured as in the diagram at right. However, a smaller court is perfectly fine! Mark out lines using the space you have available.

Begin by determining which team will serve first, generally either the winner of the previous game or a coin toss if you’re starting the first.

Note the separate service lines on the diagram at right for singles and doubles. At the start of the rally, the server and receiver stand in diagonally opposite service courts.

Serves must be hit underarm and below the server’s waist height with the racquet shaft pointing downwards. The shuttlecock is not allowed to bounce. Serves are hit from the service line diagonally over the net, crossing the center line into the other side of the court. Second serves are not allowed.

A point is scored when the shuttlecock lands inside the opponent’s court. If a returned shuttlecock hits the net or lands outside the court, the other player scores a point.

During a point a player can return the shuttlecock from inside and outside of the court. A player is not able to touch the net with any part of their body or racket, and they may hit the shuttlecock only once.

Traditionally, Badminton is played in matches. A match consists of the best of three games to 21 points. Games must be won by two points, unless the score is 29-29, in which case the first player to 30 wins.