Kubb is an ancient Viking game based on throwing femurs at skulls. That’s actually true look it up. It is basically a combination of bowling and horseshoes, and is a ton of fun to play. We highly recommend this game as an add on to any others, and it’s one of our most affordable games so you really can’t go wrong.

As a bonus if you are in the Raleigh, NC area we will even deliver the set to you so visit our rental page to book!

There are 10 Kubb sticks and 1 King Kubb along with 6 throwing batons. Set up should follow the diagram at right with the Kubbs equally spaced along each baseline. Each team can be up to 6 people.

Kubbs standing in their starting position on the baseline are called “Baseline Kubbs”. As part of the game, Kubbs are thrown into the middle of the playing field and are erected where they end up. These Kubbs are then called “Field Kubbs”.

To determine which team starts, a player from each team throws a stick as close to the king as possible, without hitting it. The team with the closest throw begins. This Team (1) starts the game by throwing their sticks underhand and vertically with the intent of knocking down Team 2’s “Baseline Kubbs”. Any Kubbs they manage to knock down Team 2 will then throw from their baseline into Team 1’s half of the playing area, where they are stood up and now referred to as “Field Kubbs”. If a Kubb is thrown outside the area of play, they have a second chance to throw within bounds. If they miss, Team 1 may place the Kubb anywhere on their side.

Play proceeds accordingly – on each turn, all “Field Kubbs” on the opponent’s side must be knocked down before “Baseline Kubbs” can be thrown at. If “Field Kubbs” remain standing on the throwing team’s side, they may throw from behind the “Field Kubb” closest to the Middle Line, rather than the Baseline. Once a team has knocked down all of their opponent’s “Baseline Kubbs” they may attempt to knock down the King Kubb. 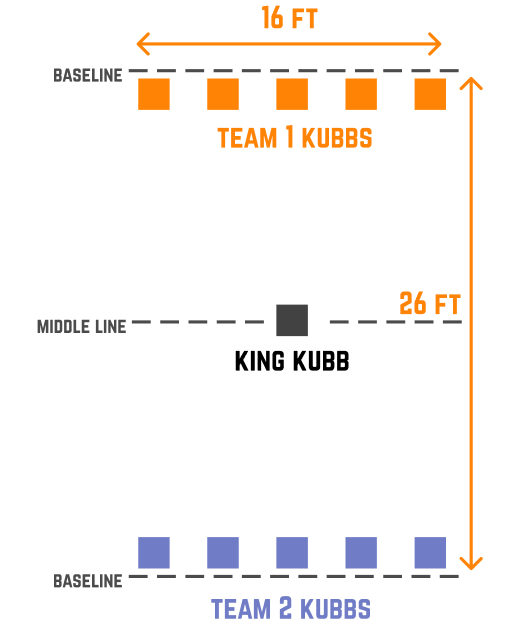