TowerBall is a fun, compact game that offers several ways to play, reminiscent of some of the classic basketball shooting games.


HOW TO PLAY: CLASSIC

Pick teams of 1-4 players and line up each team 10 feet from the side of the tower with one hole. Each team gets 4 throws at Side 1, scoring 1 point for each time they get the ball through the hole.

After each team has finished their throws, move – or, if space is limited, rotate the tower – to the next side. This time each successful throw scores 2 points.

Repeat for sides 3 and 4. The player or team with the highest score after the fourth side wins. In case of a tie, the winner is determined by sudden death.

HOW TO PLAY: AROUND THE TOWER

Pick teams of 1-4 players and line up each team 10 feet from the side of the tower with one hole. Each team gets 4 throws per turn to advance as far as possible.

A team may advance to the next side by making a shot into every hole on a given side. At the start of each turn, whichever team has advanced the furthest goes first. Once a team has advanced around all four sides of the tower, they must make a shot into the top of the tower to win. The losing team(s) has the opportunity for “rebuttal”, advancing as far as possible until they miss a shot.

In the event of a tie, winner is determined by sudden death shooting on the top of the tower.

Take turn calling shots, e.g. “by the Fur Tree, top hole Side 2”. If they make it in a predetermined number of attempts, other plays attempt to make the same shot. Other players then must make the same shot, receiving a letter of the word HORSE if they miss. Players are eliminated if they spell out the full word; last player to survive wins. 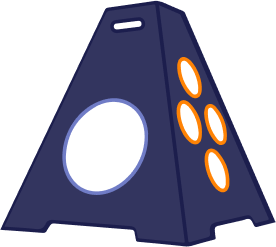